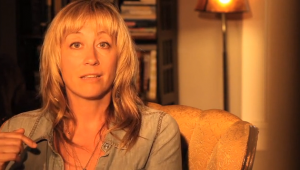 Amy Speace has had some ups and downs in her artistic career but has recently been going full steam ahead towards a new project “How To Sleep In A Stormy Boat”. She has achieved a level of notoriety after having been signed to Judy Collins’ record label and even having been covered by Ms. Collins herself.

This fall, she successfully ran a Kickstarter to raise $32,000 (THAT’S THIRTY TWO THOUSAND DOLLARS Y’ALL, YEEEEEHAWWWWWW!), seven thousand dollars more than her goal. This project has a couple of notable features that deserve attention for all you aspiring Kickstarter Jockeys out there so let’s take a look!

This is a decent video if a bit long. The video is artistically done and there is a cohesive storyline which are both critical elements of a Kickstarter video. But Amy does some very important work here that is worth taking note of.

First, Amy has earned herself the distinction of best Call To Action (CTA) that I have seen so far! She doesn’t leave any doubt as to what she is trying to accomplish and that she needs the fans’ help to do so. At 45 seconds in: “Hi, I’m Amy Speace and with your help, I’m gonna make a new record.” About 3:18 – “Now it’s just me and you.” About 3:48 – “… in order to finish it, I’m running on faith here that you guys are going to get as excited about this project and jump on board.”

In addition to these, Amy continues a clear CTA throughout the video until the very end encouraging people to spread the word as well as cohesively presenting her CTA in the project description. Very well done!

The packages for this project are pretty good. Amy provided packages across many dollar amounts from low (under $100) to very high (above $1000).

If there is one thing to pick on here, it is probably that the first place she offers a private concert is at the $3000 level. According to Kickstarter “it’s a good idea to stay reasonably close to [an items] real-world cost.” I will admit that I don’t know what the real world value of Amy’s shows are, but I do think she left some money on the table by not pricing this closer to somewhere between $1000-$1500 for a private, semi-local, acoustic concerts. Anything further out than a hundred or two hundred miles and say the backer will be responsible for additional travel expenses.

This element is another strength of the project. Important aspects of Amy’s project description include:

Stretch Goals
This is really key. As we will discuss, Amy takes the Low Road/High Road approach to her goal amount. Upon hitting her official goal amount she really has a large amount of work left to hit her unofficial goal. In order to keep this at the forefront of fans’ minds, Amy does an excellent job of highlighting her “Stretch Goals” (I like the term, by the way. Her idea, not mine!).

Artists, remember that your project description is not static! As the dynamics of your project change (like when you’ve hit a goal), update your Kickstarter project to reflect that. Don’t just bury your Stretch Goal in the project updates, get it right up front!

The Story
One thing I really appreciate is when an artist explains to their fans the economics of their situation. In an email interview, Amy indicated to Launch & Release that her biggest hurdle or fear in the project was how to justify the fact that she was asking people for money. She is on an independent label and she figured people would wonder why the label wasn’t paying. Well, she took the bull by the horns and was just up front and honest. What an amazing policy!

I am not making fun of her. What I am insinuating is that people so often try to justify asking for money in ways that are either veiled or where the artist is just saying what they think people want to hear. I am not a proponent of that but I am a huge supporter of just being transparent and honest!

Amy makes it clear that the label is not a conventional label and, thus, are not paying for the album. She also is very clear in laying out what she needs to pay for all the way down to the amounts. This is a Launch & Release BEST PRACTICE, kudos to Amy for including this in her project description!

Call To Action
Finally, the CTA is very clear. Right off the bat below the video: HELP ME MAKE MY NEXT RECORD. She also very clearly states what she needs in her “HOW YOU CAN JUMP ONBOARD” section near the bottom of the description.

If there was one thing I would like to see in the project description, it is a few images. I’ll say it before and I’ll say it again, images are a L+R best practice! Images increase readability and conversion rates.

This is a good example of the Low Road/High Road approach to setting goals. Amy’s official goal is $25,000. That is nothing to sneeze at but what she really needs is $40,000-$50,000! She makes this clear from the very beginning, laying out her needs in the project description. At the time of writing this, the project is complete and Amy did beat her official goal by several thousand dollars. She didn’t receive everything she wanted, but her project is funded and moving forward and that is what’s important.

Amy uses her email list on a monthly basis to update fans on everything from the standard tour dates to the not-so-standard-but-so-awesome restaurant recommendations and books. This is a good example of keeping your COI engaged and is one of the factors that allow an artist to present their Kickstarter in a better light. Instead of coming out of nowhere asking for money, Amy is just continuing a dialogue in the context of sharing the process with fans. Perfecto!

Overall, this is a strong project. And Amy raised thirty two thousand dollars ($32,000 Y’ALL, YEEEEEHAWWWWWW!)! She shows her experience in the industry by laying out a project that is cohesive, clear, and concise.