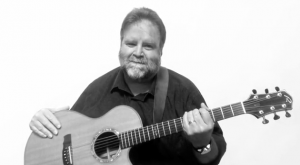 Now here is a savvy veteran of the music industry. Bob Bennett has been around the block a time or two starting over 30 years ago in 1979. He has released 11 albums “depending on how you count them”. I am guessing the 80s may be a bit of a hazy blur for Bob! Now, here he is using Kickstarter to assist with the release of his 12th album, Joy Deep As Sorrow. At about the one-third point, Bob’s Kickstarter has fully funded at over $8000. (THAT’S OVER EIGHT THOUSAND DOLLARS Y’ALL, YEEEEEHAWWWWWW!)

Short & to the point
Short videos don’t bother me a bit as long as they say what needs to be said. Bob’s does by giving his background, speaking to what the project is about, and delivering his Call To Action (CTA).

The CTA does need to be more clear along the lines of who will do the action, what is the action, and when should the action be taken.

Bob really shines here. In our email interview, he referenced Kickstarter’s suggestion to really nail the packages and he took that to heart saying:

you definitely need to think in two directions: “What’s a normal and reasonable Reward that people can expect?” (Free “items”. etc.) … and “How can I be creative in a way that ‘fits’ me and attracts a contributor?”

In browsing through Bob’s packages, there are two things to note. First, they have a good flow. The dollar amounts increase appropriately and the rewards also increase proportionately. Second, the first fact is reflected in that the backers are distributed very well across packages. Bob has an appropriate package for almost everybody.

An appreciative man
There is a very cohesive thread throughout this Kickstarter of Bob being appreciative, sincere, and respectful. His video conveys this. His project description continues it by using language such as “kindly consider”, “my thanks”, “I appreciate your giving”, and “thank you for your kind consideration and generosity”. His packages follow up appropriately. I love the $15 package in particular:

People ask all the time, “Can I pre-order your CD? Would that help?” Yes, it would. And this is the plain-and-simple sum-total of this reward.

Call to action is buried
I will pick on Bob here as I do with most artists. The Call To Action is there but it is really buried. Bob is obviously a very respectful man and doesn’t want to come on too strong. That is appropriate but that doesn’t mean you don’t make your point which, again, is: who, what and when.

Use images
I realize that the artwork for this project is not finished but even including some studio pictures would be nice. It’s been proven time and time again that images increase readability and conversion rates (conversion is when viewers “convert” to buyers).

Bob’s goal amount is not for the entire project. It is for finishing recording costs, mastering, artwork, and CD manufacture. Bob successfully funded his project in 3 days. If he so chooses, now (about one-third into the project) would be a great time to introduce some Stretch Goals and to engage his fans further by communicating what sort of value additional funds would add.

To name a few, Stretch Goals could be things like:

I don’t point this out to make Bob sound foolish, he is clearly not. We should all realize as Bob does the importance of our email list. It is a foundational tool in marketing/sharing our artistic efforts with our fans. It is an invitation straight through the door which is way better than just getting a foot in.

All of this being said, Bob has been using his mailing list along with Facebook which has treated him well. As he says, “it’s seem obvious to me that both/and (email/Facebook) is much smarter than either/or.”

Furthermore, Bob points out something very useful with respect to how we communicate with fans:

A fellow musician I’ve known of for a long time started posting lots of Kickstarter announcements directly on my Wall for his own campaign. I thought it was presumptuous in the extreme. He, unwittingly, gave me a high-resolution example of what NOT to do. I felt bad for his lack of netiquette, but it also reminded me that it’s vitally important to not oversell or over-bother your constituency.

His point: be PERSONAL which, of course, is also respectful and sincere. I haven’t seen his exact communications via Facebook, but I am betting he does this very well.

Bob does two things exceedingly well: first, his demeanor towards fans is simply top notch. He clearly understands how his fans need to be treated. Second, his packaging shows great attention to detail. Study this. Your packages won’t necessarily look the same, but the ideas of appropriate distribution of price points along with appropriate value are applicable to everyone. Great project, Bob!