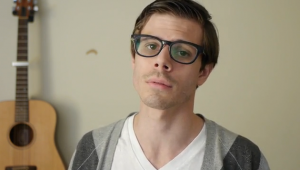 Not all Kickstarter projects need to be for thousands and thousands of dollars, no sir-eeee Bob! Enter John Valenti and his project: $500 in 20 days.

Now, one might think that for that amount of money you don’t even need to try. But guess what… you do! In doing so, John put together a great little video that I think is important to share. Along the way, we’ll take some notes on the ins and outs of John’s project. This one is going to be short and sweet but, as always, valuable. Ready, set, go!

I stumbled across John’s project a couple of weeks ago. Without looking at the details too much, I jumped into his video… and it killed me! If you need inspiration for your Kickstarter video, do yourself a favor and watch John’s. It is short and it conveys what it needs to including a Call To Action (CTA) to his fans (which as always, could be a bit clearer, but I will take a day off from harping on that too much given how funny this is!).

John indicated to me that setting his packages and price points was his biggest difficulty. In the end, he did okay, but left money on the table.

First, for only $2 more, you get a CD. IMHO, this is not sound economics. Given the overall budget of $500, the run is small enough that the cost of each CD is certainly greater than $2. Not only that but you incur the cost of packaging and shipping. In this case, bump the package price up to $20. If you feel you haven’t provided enough value, throw a sticker or two in with the CD.

Also recommended would be at least one other package in the $35 dollar range, give or take a bit, offering the digital download, a CD, a few stickers, and a T-shirt. Perhaps in this case John didn’t want to introduce the logistical hassle of another product but if your goals are bigger, you will want to do this.

Again, simple and straight forward with clever wit. Can’t complain there. It would still be a good idea, however, to include a clear CTA. And how does that go again?

A clear, consistent call to action is your friend.

It has been a long time since I’ve had to call Discmakers to order CDs but I am guessing that John probably made around 100 CDs. No bones with that ~ do what you need to do.

I would note that John really could have included recording, mixing and mastering costs in this project and most likely gotten a lot of traction. He is an engaging artist and presents himself well. With a little bit of work developing the storyline of the creative process in the video and project description and a more robust offering of packages including the good ol’ T-shirt, this project would be well poised for success.

In my interview with John he mentioned he created a Facebook event which he invited 175 of his FB friends to.

Usually, we don’t encourage artists to reach out solely through Facebook. But if that is what you are going to do, do it like John! Perhaps I am being presumptuous here, but reaching out personally to your friends will never be a bad idea.

I am guessing that this wasn’t just a FB blast to his fan page but was instead an actual, personal invitation. Many other artists that we’ve been talking to in the last month have employed the same approach and had good success with this. It’s all in how you handle it.

This is a great little project and John reached his goal. As you are preparing your own Kickstarter, this is not a bad reference point to begin in that John has a clear sense of himself and what he needs. There are a few things to improve upon if you have more ambitious goals but, all in all, job well done.