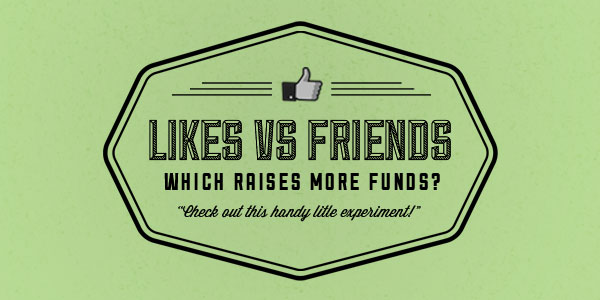 Does Attempting to Go Viral Make Sense When Crowdfunding Your Music?

In talking to musicians about their crowdfunding projects, a very common assumption is that you need to reach as many new people as possible.

But in reviewing hundreds of projects, it appears that the most successful projects usually also do the best job of contacting and fundraising within their current Circle of Influence: the people who they already know including family, friends, fans and such.

Another way to phrase this question is who will pledge more to your campaign? Strangers you just met and don’t know very well? Or people who already know you, trust you and value what you are doing?

Well, obviously a person who you are very close to such as a family member or best friend is a lot more likely to back your project than is some stranger from cyberspace. And this is true even if both of them like your music the same amount!

The difference between the two types of people is that you have a personal connection with one but not the other.

So, with all of this in mind, I thought I’d turn to the numbers to see what they would suggest.

Just to be clear, we are not trying to measure how many of your Friends or Likes will become backers. That is much more complex.

We are simply looking to see how well either of these numbers predicts the final number of backers.

For good measure, I will also take a look at the size of the projects’ email list.

What I want to know is whether the numbers which demonstrate a more personal connection to the project do a better job of predicting how many backers the project will have.

In other words, do you get a better sense of how well a project will do as you look at closer relationships to the project.

If this is the case, it should give you a pretty solid idea of how other projects are working and, assuming that you don’t have some crazy situation, it will give you a good idea of where to focus your attention when you launch.

For the nerds (skip this if you don’t care about the math):  I used simple regression analysis to explore the correlation between number of Project Backers and three separate proxies (sort of like estimates) for the projects’ Circles of Influence (or size of audience). The proxies were number of Facebook Likes, number of Facebook Friends, and size of email list.

And The Winner Is… number of Emails!

Take a look at the table below: 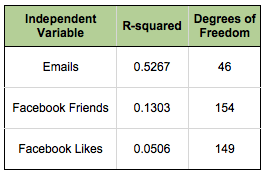 Each row of the table was a separate regression modeling backers as a function of the specified variable. If that didn’t make sense, don’t worry about it and just keep going.

If you care about the column called “Degrees of Freedom”, read the next nerd-oriented box. If not, skip ahead.

For the really nerdy (skip this if you don’t care about the data): hey nerd buddy, glad you are here! I will admit to totally geeking out on numbers and, to be quite honest, I think it’s pretty rad. So screw all the cool kids that just skipped ahead and revel in the fun…

The data set included 204 projects. Each project had data for at least one of the three proxies (Likes, Friends, or email). Each regression used all available data points for the given variable so the sample sizes did differ. The data set was collected by hand so it isn’t unimpeachable. However, there are enough observations to have some confidence in the results which are consistent with expectation.[/box]

The implications are pretty major here.

You can count on pledges from those you are closest to much, much more than from new people you encounter mid-campaign.

And honestly, we don’t need to design some highfalutin, fancy-ass statistical test to know that. It’s simply human nature.

The more familiar and personal you are with a person (or set of people), the more likely those people are to pledge.

That’s why most projects gain as many or more backers from their set of personal connections like friends, family and turbo-fans as they do from larger groups of people such as all of their Facebook Likes.

Bottom line, the stronger your connections, the more you should concentrate on that group of people.

Project funding depends on the volume of your trusted, personal relationships much more than it does on the number of loose connections you have floating around in cyberspace. This is especially true for the 75% of crowdfunding projects that will raise less than $10,000.

The reality of crowdfunding for most independent artists is that the audience most likely to contribute to and fund your project is the audience you already have: friends, family and current fans.

This audience will back you because:

These are the top three reasons a person will back you. Period. Counting on any other reason as somebody’s motivation to back you has a low percentage probability of working.

These are the people who will fund your project.

The takeaway: your best bet for crowdfunding your project is to concentrate on your existing relationships. Contact them in the most intimate, personal way possible and you will be on your way to a successful crowdfund!