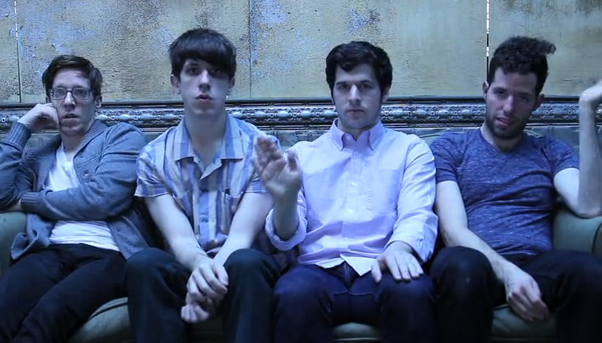 The Kickback is a group from Chicago, IL, with some South Dakota roots.

This may not be a combo you hear of often (South Dakotans rarely move to Chicago, I’ve heard) but The Kickback is absolutely crushing it as they raise money to fund their debut album!

Here are a few tips and tricks that their project highlights.

Reach Out Any Way You Can

Beyond a shadow of a doubt, when nobody knows about your crowdfunding project then you will receive zip/zero/zilch/nada through pledges.

And it makes sense that when more people know about your project, then your odds of success and funding will be higher.

But trying to maximize the number of people who know about your project is an extremely daunting and ambiguous task that often leads to procrastination, unfocussed effort or, worst of all, paralysis.

The Kickback took a very reasonable and doable approach to spreading the word about their Kickstarter campaign.

I think everyone in the band has found themselves reaching out to people virtually anyway they can. From family members to professors from college to disinterested people from high school, we think that people knowing the campaign is even happening is a big part of (hopefully) making this successful. ~ Billy from The Kickback

Choose the Crowdfunding Platform that is Right For You

Kickstarter is all-or-nothing and has national and international brand recognition.

Indiegogo has flexible funding that let’s you keep any funds you raise but isn’t quite as well known as Kickstarter.

Pledge Music positions itself as a direct-to-fan avenue and allows pledges all the way through product fulfillment allowing you more time to collect pledges.

And those are only the three most recognizable platforms!

Somehow, you have to choose which one of these makes sense for you and this decision needs to be based on the factors surrounding your project.

For The Kickback, Kickstarter just made sense.

Our campaign fits very much into the Kickstarter “All or Nothing” approach because the basis of our goal is that we’re tired of making records the wrong way: cheap and usually in one or two days, as fast as humanly possible, and not particularly happy with the result. People who know us and those who watch our video hopefully understand that this is something we’ve been fighting for (literally) years. We either want to make a record the right way or we’ll wait longer, so having a set goal is just the way it has to be for us. ~ Billy from The Kickback

Tip: Before deciding which platform to use, take a little time to consider your needs. (But don’t turn the choice into an obstacle. Actually creating your project is by far the most important objective!)

Dont’ Be Shy, ASK for Support

This is always a tricky topic for many artists when it comes to crowdfunding.

You don’t want to seem needy, greedy, ungrateful or poor (even if you are). So asking for money feels bad.

If you’re worried about dignity, you shouldn’t be publicly asking people for money.  ~ Billy from The Kickback

This quote made me chuckle, but what I take away from Billy’s comment is that if you are crowdfunding in the first place, you cannot be ashamed to ask for money.

He is right on about that and note that there are also many reasons why it is both legitimate and important to ask for money.

Tip: Be unapologetic and direct when you ask for money. Make sure people understand that you are chasing your hopes and dreams with their donation not just boozing it away! Give a clear Call to Action with your project that asks for people’s pledges.